Join renowned artist and travel photographer Guillermo Velez to explore the coolest geographic destination in the world, follow his guided tour to most unique locations, glaciers, icebergs, waterfalls and if lucky some Northen Lights. Learn some tricks and return with award-winning images of your own.

After arriving at Keflavik airport, you will take a short bus trip into the capital city, Reykjavik. Once you’ve checked into your hotel, we will get together as a group for dinner and discuss the adventures to come.

We will collect you from your hotel at 8 in the morning, before beginning the journey north to the start of the tour in the Snæfellsnes Peninsula, west Iceland. We will spend two nights there in total, taking our time capturing the jagged rock formations along the coast near Arnarstapi in the autumn light. Arnarstapi is a quaint fishing village, where the rolling waves of the Atlantic produce a lovely interplay between the ocean haze and the light. Further along the coast, the famous black church of Budir will provide another picture-perfect scene, helped by its stunning backdrop: the icy Snæfellsjokull Glacier. To top of the day, we will take in the otherworldly sight of Mt. Kirkjufell, easily one of Iceland ́s most beautiful mountains. It’s well known for its almost perfect cone-shaped form, and the surrounding waterfall, rivers and hills make the area a photographer’s paradise. The mountain also provides the perfect foreground for Aurora Borealis, so we’ll cross our fingers that the lights come out to play while we’re there. The result will take pride of place in your portfolio.

On the third day we will continue our exploration of the Snæfellsnes peninsula, known affectionately as the "miniature Iceland", purely because of the incredible variety to be found in its natural landscapes. The entire coastline is dotted with photogenic, charming little small villages, and the colours of the fall will be all around for the group to enjoy. Mighty mountains and fjords will surround us throughout our time in the area, so prepare to capture plenty of iconic images, including the huge basalt stones of Londrangar.

On the fourth day we will leave Snæfellsnes and head north to another peninsula, Vatnsnes. The area is known for having a wild side, and offers a great chance to see, among other things, some magical Icelandic horses in their natural habitat. Some more of Iceland’s fantastic nature, the local seals, might also come into focus as we

venture to the eastern side of the peninsula, along the coastal region of Strandir in the Westfjords.

For photography, our main focus will be on Hvitserkur, a 15m high basalt carving that emerges from the sea in the most spectacular way imaginable. It’s said that the stone resembles a dragon taking a drink, or in another viewpoint, one of the local trolls. According to legend around these parts, the stone is a troll who couldn’t escape the rising sun in time, and was turned to stone! Whatever your thoughts on the origination of Hvitserkur, the mysterious rock is tremendously photogenic, and we will make sure to spend plenty of time in the area to capture it from several angles and in different lights. Accommodation: Akureyri

After an early breakfast in Akureyri, the group will set out for Godafoss, the ‘fall of the gods’, for a sunrise shoot. As the name

suggests, this is one of Iceland’s most epic waterfalls, and during the autumn there will be plenty of subtle colours around to balance out the sheer power of the falls. Godafoss is perfect for a sunrise shoot, and its semicircular shape means there are plenty of angles to play with in the emerging light.

With the sun up, we will head east toward lake Myvatn, one of Iceland’s breathtaking bodies of water, formed by a volcanic eruption which has certainly left its mark. Eerie rock formations and craters remain scattered through the area, and the lava pillars are a photographer’s dream. If we have time, we will also explore the unique sculptures and rock formations of Dimmuborgir, to the east of the great lake. The area looks a lot like another planet, which probably explains why several scenes from the epic TV series Game of Thrones were shot there.

On day six we will take our super jeep out into the Icelandic highlands to see two more beautiful waterfalls on the Skjálfandafljót river, Aldeyjarfoss and Hrafnabjargafoss. At the first falls we will capture the contrast between the dark basalt columns of Aldeyjarfoss and the clear water of the autumn plunging below. Next up is Hrafnabjargafoss, again embedded into volcanic rock, but with a pristine blue pool at its feet that will provide every photo with a hint of magic.

On day seven of our photography adventure, we will carry on our exploration of the area around lake Myvatn. To the east is the colorful geothermal area of Namaskard, where the mixture of orange sands, bubbling vents and geothermal activity provides plenty of opportunities to capture Iceland’s wild side.

As well as the active geothermal area, we’ll visit a place that owes its existence to Iceland’s volcanic history, Hverfell. Hverfell is one of the world‘s largest explosion craters, with a diameter of around 1km. After all of that, the group will take a collective sigh of comfort in the Myvatn Nature Baths, in many ways the Blue Lagoon of the north.

We will once again stay overnight in Myvatn.

The journey through the Autumnal Icelandic landscape continues as the group heads east on day eight. The destination: Jokulsargljufur National Park. On the way there, we will take some time to capture the mighty Dettifoss, Europe’s most powerful waterfall, in all its glory. 100 meters wide and 45 meters high; this is one waterfall you’re not going

to forget in a hurry. Armed with your camera and plenty of new photography skills, there will be the opportunity to collect some epic memories during this particular stop.

Afterward we’ve had the proverbial cobwebs blown away by the power of Dettifoss, the group will traverse a highland desert and a mountain pass to reach the timeless Eastfjords. We will also be entering the vicinity of the Vatnajokull Glacier, Europe’s largest glacier and a national park. Photography-wise, the area is packed with textures, from mountainous fjords to barren volcanic desert and ice-capped glacier. We will spend the night in the quaint fishing village of Djupivogur, and appreciate the harbour’s spectacular, mountainous backdrop.

Whilst in the area we will also have the chance to photograph the Rjukandi Falls - a layered waterfall that makes its way down a nearby mountainside with both grace and formidable force. It’ll make for a superb photography session, surrounded by the reds and yellows of the Icelandic fall.

Day nine sees the photography tour begin to understand what makes Iceland such a magnificent place to visit. We will head to the famous Vatnajokull National Park, home to a number of natural spectacles that, simply put, can only be witnessed here in Iceland. We will spend three days near the world famous Jokulsarlon lagoon - the prime location for photographers seeking to capture nature in action, as huge blocks of ice break of the glacier and float effortlessly on the lagoon and out to sea. Huge blocks of ice sounds almost clumsy, but these are some of the most serene, artistic scenes to be found in the natural world. So picture that, but with the added embellishment of an Icelandic sunset or sunrise. If we’re lucky, we may even witness some of the local seals swimming in the lagoon.

On the tenth day of the tour we will continue exploring the icy serenity of Jokulsarlon. As a group we will take our time photographing the glistening icebergs, and also capture some great shots of ice crystals washed up and scattered across the black sand beaches. We’ll start early with a sunrise shoot from the beach, and aim to capture the sun’s first rays illuminating the lagoon. Later on we will explore some of the area’s other breathtaking glacial sights.

On the eleventh day of this incredible Icelandic photography workshop, we will drive to the east of Vatnajokull National Park. There the group will enjoy the views from the black sand beach of Stokksnes, across to the imperious peaks of the 454 meter-high Vestrahorn mountain. The epic Vestrahorn is a photographer’s dream, is made up of several steep peaks, all stretching endlessly, impossibly out to sea. Against a backdrop of the sun’s morning or dying light, these peaks offer as enticing an image as you can imagine. Add that to the rolling tide below and the possibility of northern lights, and you’ve got yourself a recipe for plenty of photographic fun. We will spend plenty of time chasing the perfect light as we shoot this mountain and its surroundings.

On the 12th day of our tour, we will reluctantly leave behind the majestic Vatnajokull National Park. The group will head south to explore some of Iceland’s finest sights across the southern coast. In autumn, the region boasts spectacular natural attractions, from volcanoes to lava fields, lakes, black beaches, waterfalls and glaciers - all accompanied by the subtle colours of the fall. On day twelve, our focus will be on the coastal village of Vik, and its enchanting black sand beach, complete with an impressive basalt sea stack that juts out of the sea, named Reynisdrangar.

Another of Iceland’s famous black beaches, Reynisfjara, is nearby. There we will enjoy what is considered to be the most beautiful non- tropical beach in the world. An alternative view of the towering sea stacks, alongside the eerie black sand and thunderous waves, all add up to create an epic photography session.

It’s the last full day of the tour, and we’re going out with a bang. After a hearty breakfast the group will stop at several scenic highlights on the way back to the capital. The first will be the Dyrholaey peninsula. As well as getting yet another perspective of Reynisdrangar, we will also observe the enormous stone archway standing in the sea nearby. Then, we will pass two active volcanoes. The first is Hekla, a 1490m high snow-topped mountain, infamous throughout Iceland’s history and known as, a little disturbingly, the “gateway to hell”. The second you might have heard of, even if you can’t pronounce it: Eyjafjallajokull. This is the volcano famous for shutting down European airspace back in 2010.

If we have time, we can stop near to the Solheimajokull Glacier, or at least its icy tongue that protrudes from the mouth of huge, rugged

cliffs either side. Next up, we will shoot the two most famous waterfalls in the south of Iceland. The first is Skogafoss, which promises epic shots, no matter what the light. And even more so with the colours of autumn all around. It’s one of the biggest waterfalls in Iceland, cascading down from almost 60 meters. If we’re lucky with the weather and there’s some sun, the spray from the falls will, fingers crossed, reward us with a magical rainbow to end the trip with. After that we’ll head to Seljalandsfoss, which offers views from behind the falls for an alternative and altogether unforgettable perspective. Accommodation: Reykjavik

It’s all over! A sad day, but after another hearty Icelandic breakfast we will bid you a warm goodbye as you depart back on the FlyBus to Keflavik Airport. 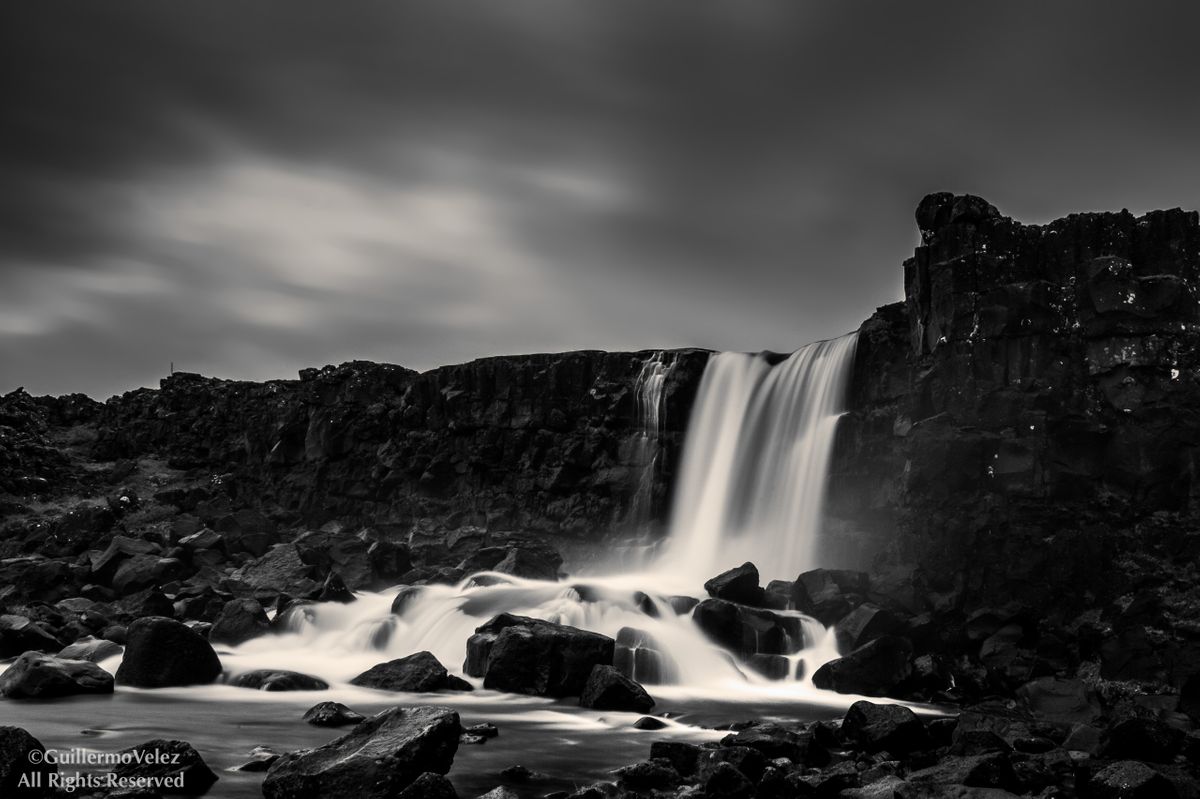 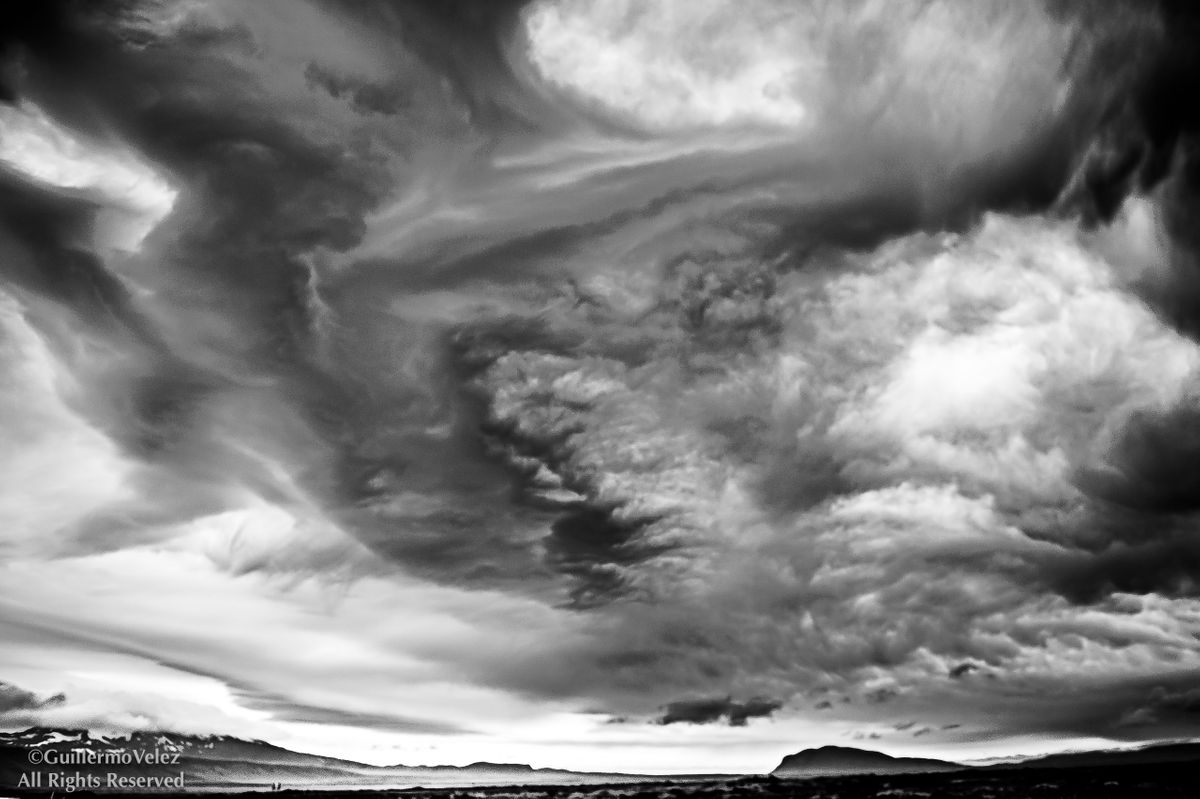 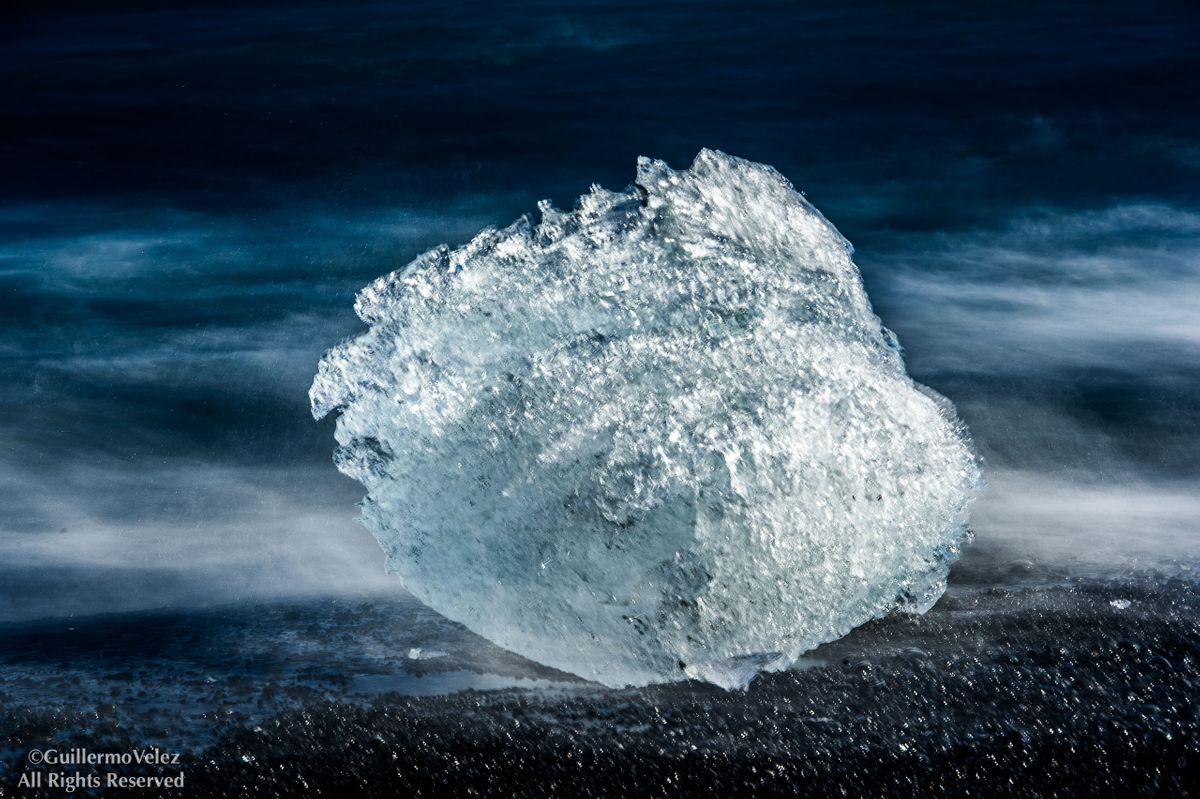 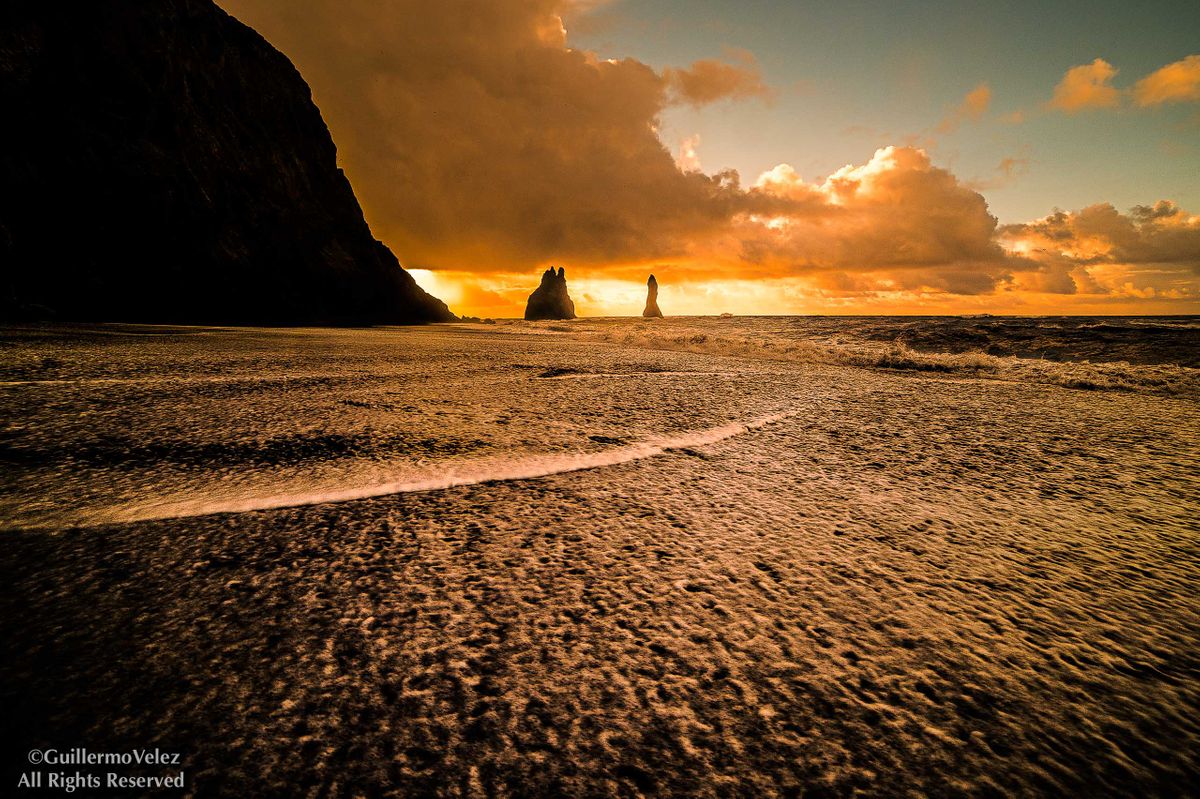 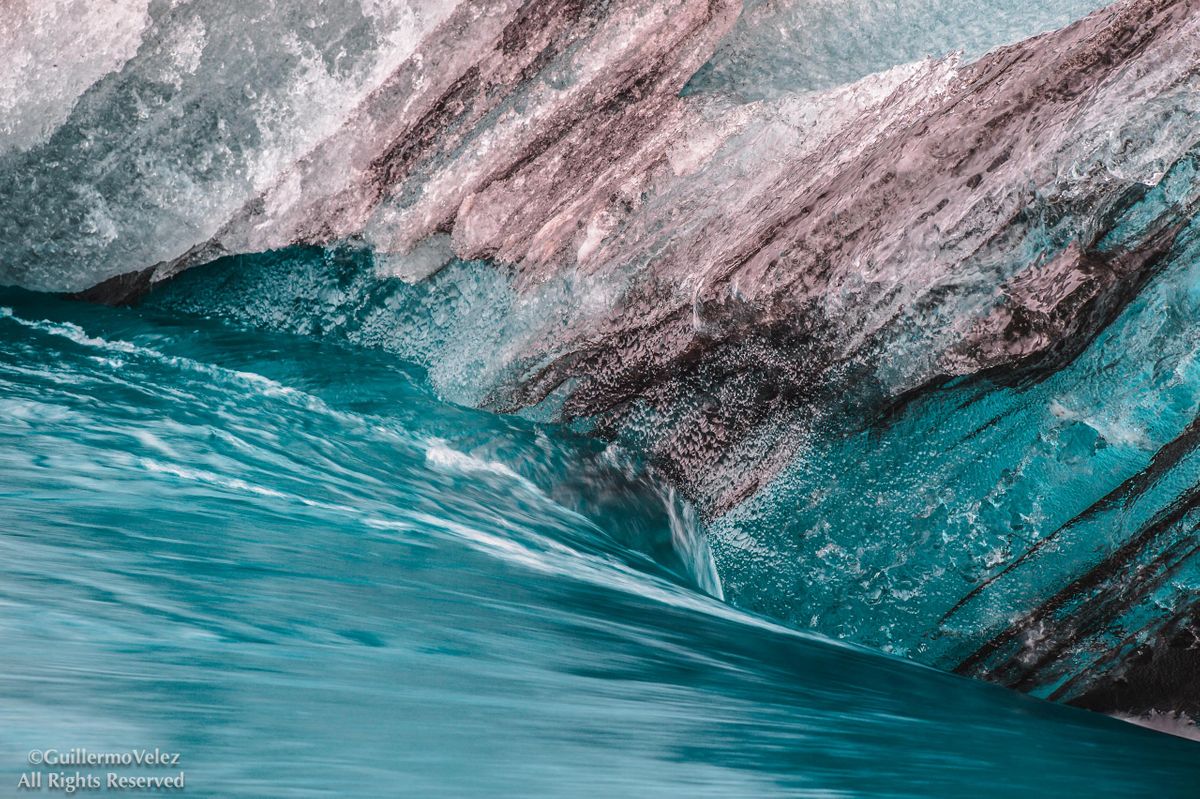 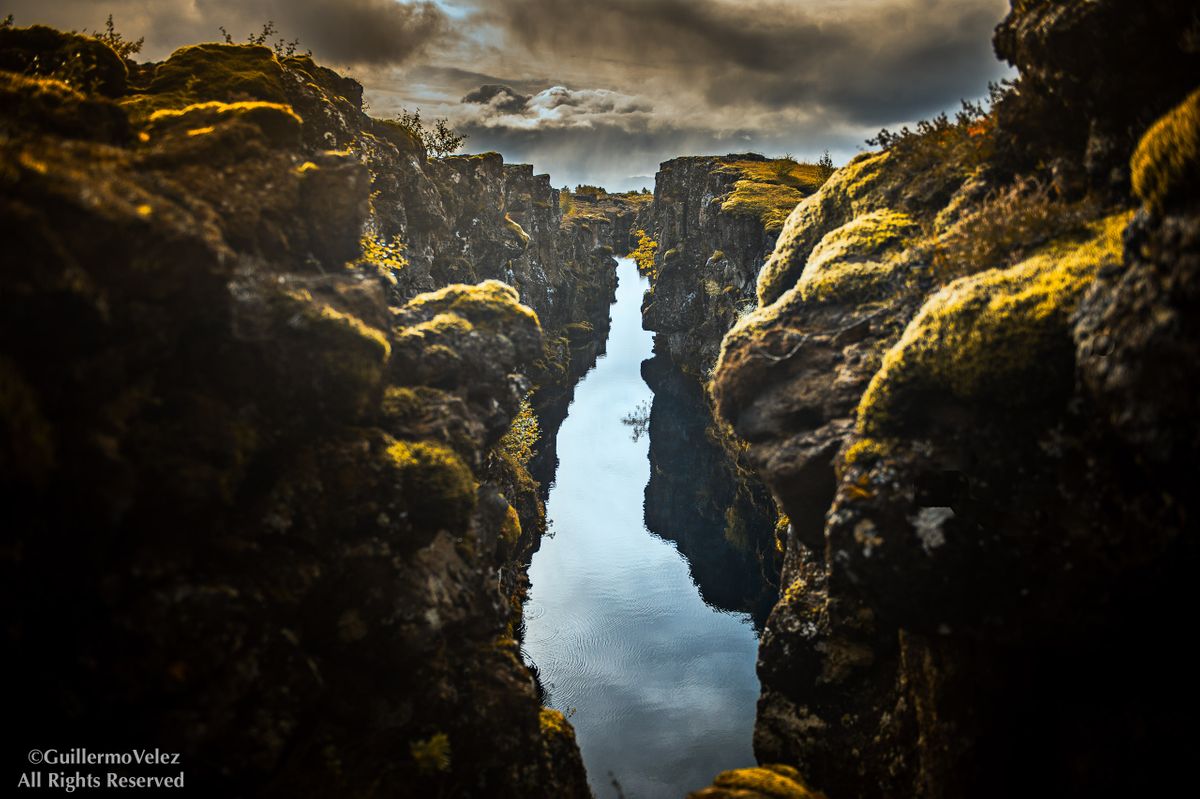